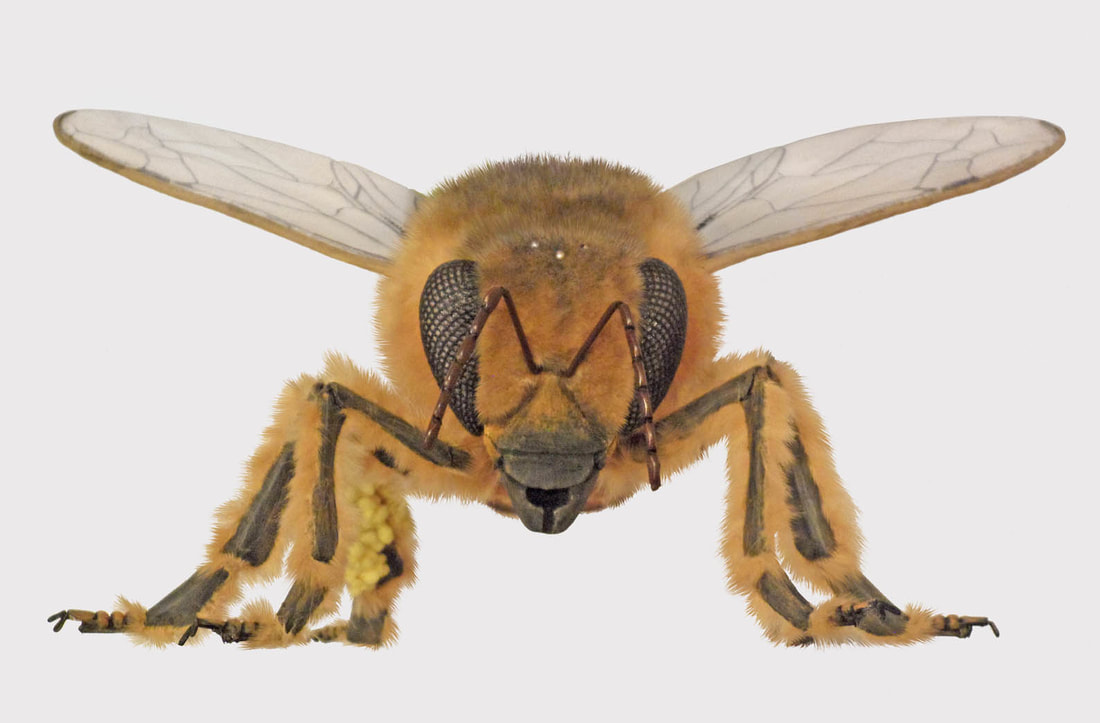 Bees can hook and unhook their two pairs of wings as needed.

Artist Jim Thompson had no idea that befriending his neighbor, Dolly Warden, in 2015, would soon lead him to building 16″ x 16″ honeybees.
​
Dolly is the passionate bee advocate who spearheaded the certification of Talent, Oregon, the nation’s second Bee City USA affiliate.  As her community can attest, her love of bees is contagious. Jim serves on Talent’s Bee City USA committee and is very active in enhancing pollinator habitat.

Rather than being easier, the second giant honeybee turned out to be more challenging for Jim than his first because the more he learns about these ever fascinating creatures, the more accurate he wants his models to be. He even attached the bee’s hairs almost one at a time, a torturous, time-consuming and tedious endeavor requiring extraordinary patience and a very steady hand.

Bees’ antennae allow them to smell nectar and pheremones, and their hairs are magnets for pollen, becoming electrostatically charged as they fly–their positive charge is magnetically drawn to flowers’ negative charges.
Jim said, “I’m finding through necessity how subtle differences from bee to bee are more common that many of us realize. Perhaps this could be compared to genetic traits in us, slight differences in our facial features, body types, height, body mass, skin colors. There is apparently no such thing as a generic insect or human or anything. Where to draw the lines of detail on a specific bee species is more complex than I originally thought. Aside from what vital roles bees play in our sustainability and quality of life, we can now see that in the insect world there are subtle variations as well as complexities, like in us, or other animals.”

Jim continued, “It’s an interesting planet and it takes a lot of work, enthusiasm, passion, insight and science to appreciate the biodiversity we mostly don’t see and often take for granted. I hope our species can come to its senses and perhaps save itself, too, by a growing awareness of how vital it is that we pay attention to the busy, unseen world all around us every day.”

Thanks to Jim and the other artists who help us to better “see” the small creatures that make our planet bloom and fruit. You can see Jim’s bee at Bee-Licious Honey in Portland, Oregon and his online gallery here.