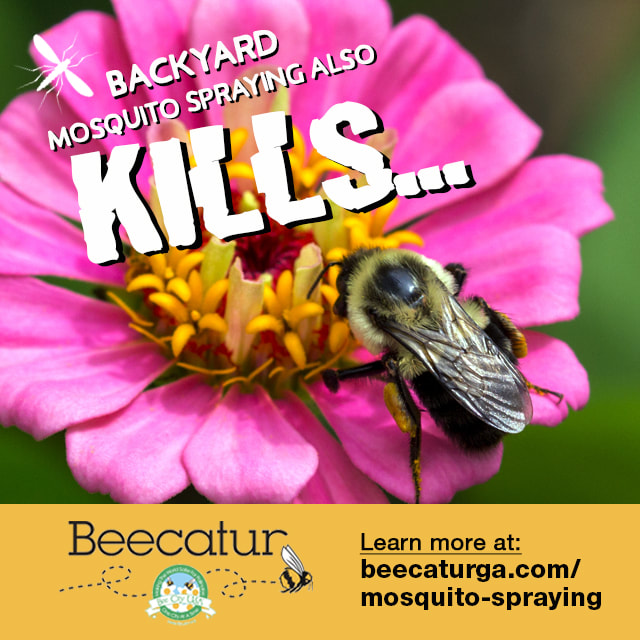 Backyard Mosquito Control Services On the Rise
Recent years have seen a dramatic increase in the number of backyard mosquito control services operating here in Decatur and throughout Georgia. In fact, there are now more licensed mosquito control providers in our state (690) than McDonald’s restaurants (453)!  Most backyard mosquito barrier treatments consist of a broad-spectrum insecticide, usually a pyrethroid. Pyrethroids are synthetic versions of pyrethrin, a toxin found in Chrysanthemum flowers. Thus, mosquito control companies will often market their services with words like “derived from flowers,” “organic,” “green,” “environmentally friendly,” “biodegradable,” or “natural.” Pyrethroids are in fact chemical nerve agents.

Application is commonly performed via a backpack sprayer or fogger. This is problematic due to the possibility of drift into areas containing blooming plants that attract bees and other pollinators, and drift across property lines. Other services install automatic misting systems that function similar to programmable lawn sprinklers. Such misting systems are neither EPA-approved, nor endorsed by the American Mosquito Control Association, which states they can put pesticides unnecessarily into the environment, kill non-target insects, and promote resistance in mosquitoes, thus exacerbating the mosquito control problem.

Some service providers offer bee-safe blends of essential oils or garlic designed to repel mosquitoes. Though some homeowners swear by them, the effectiveness of these formulations is unclear. 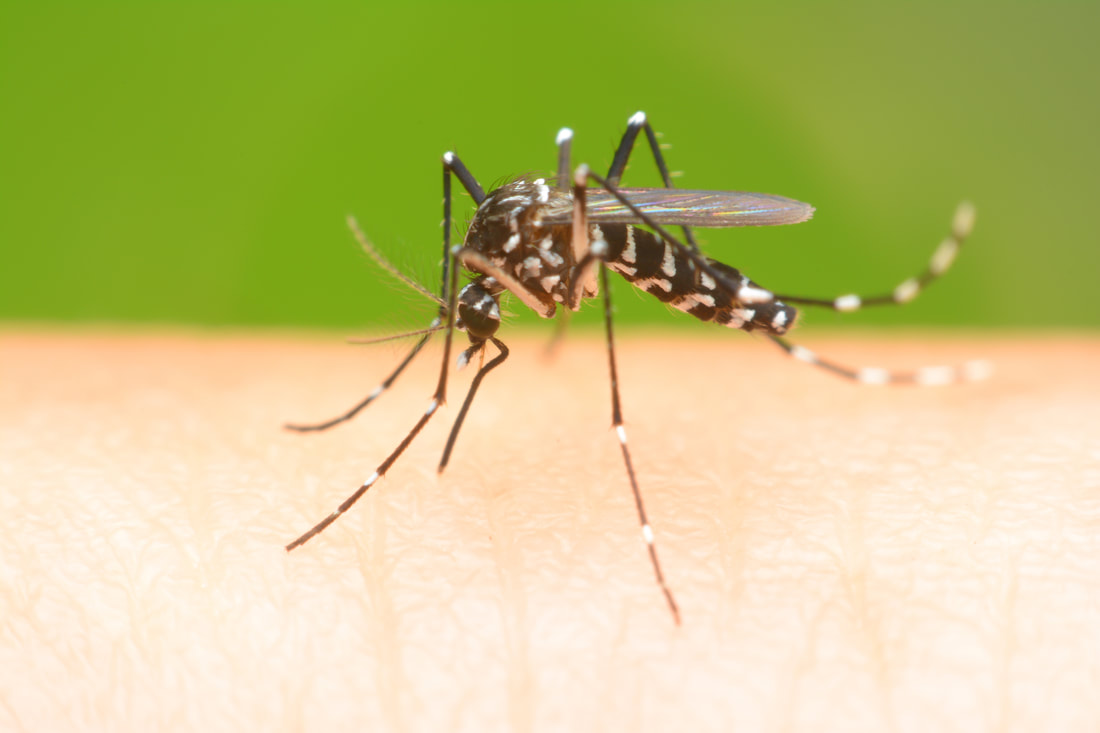 Protect Yourself First
Instead of spraying your entire property, spray yourself. Applying skin-based insect repellents when outside and avoiding outdoor activity at dawn and dusk when mosquitoes are most active are safe, simple, proven means of avoiding annoying bites. If you don’t like DEET, try a product with Picaridin or organic repellents that contain Lemon Eucalyptus oil.

Because mosquitoes are notoriously weak fliers, keeping the air moving with a box fan or overhead fan when you sit outside is another effective – and pleasant —  deterrent.

Encourage Mosquito Predators
Attracting and encouraging the presence of natural mosquito predators like birds, dragonflies, spiders and bats can also be an excellent means of biocontrol. But to do so, residents must first begin to think of their yards as what they really are – mini ecosystems.

Perspective on Mosquito-Borne Illnesses
Last year, metro Atlanta received more than 70 inches of rain. With an average daytime high of 89 degrees F during the summer months, mosquitoes thrive here. Nevertheless, mosquito control companies sell a vision of backyards that are 100% free of biting insects. This wholly unrealistic expectation is typically bolstered by an appeal to fear of mosquito-borne illnesses. Diseases like Zika virus, Dengue fever and Chikungunya are often cited though, according to the Centers for Disease Control and Prevention, none have been locally transmitted in our state. Other companies stoke fears of Malaria, a disease, which while a killer worldwide, was declared eliminated in the United States in 1951. While some mosquito-vectored illnesses like West Nile Virus are of real public health concern, it is important to note that only 34 cases were reported statewide in 2018. Of these, two deaths occurred. For perspective, 145 Georgians died of influenza last year, more than 600 due to gun violence, and an average of four people die every day on our state’s roadways. The reality of mosquito borne illness in Georgia simply doesn’t measure up to the perception that mosquito spraying companies are selling.

The typical backyard is home to approximately 1,000 different species of insects and a single acre may be home to more than a million individual insects. Some of those will be mosquitoes – this is Georgia after all. Killing them all indiscriminately simply isn’t the answer.

Collectively, Decatur’s residential backyards form an important part of our larger ecosystem. Mosquito control insecticides wreak havoc on that ecosystem. Thus, foregoing the use of backyard pesticides is a vital step all Decatur residents can take to help keep our community environmentally healthy and pollinator-friendly.

Bee City USA Editor’s Post-Script
Like Decatur, Bee City USA – Greenwood, South Carolina, under the leadership of Ann Barklow, has been aggressively educating the community about pollinator-conscious mosquito abatement. The impetus for creating their S.W.A.T. (Standing Water Attack Team) program was multiple mosquito spraying events by the City of Greenwood following a confirmed case of West Nile Virus in 2018. Bee City USA – Greenwood will soon be distributing this door knob hanger throughout Greenwood to raise awareness of steps individuals can take to protect themselves from mosquito bites, and pollinators from mosquito sprays. Contact Ann Barklow at ann.barklow@gwdcity.com for more information.

Here are some publications regarding mosquito management from the Xerces Society:

An initiative of the Xerces Society, Bee City USA’s conservation work is powered by our donors. Your tax deductible donation will help us to protect the life that sustains us.