A version of this article originally appeared in the Spring 2022 edition of Wings magazine.

What’s the best thing to do with a banana peel? According to my Grandma Foltz: set it out on the front stoop for a few days to feed the ants. Same story for bread crumbs, apple cores, and pretty much every other kitchen scrap.

While I don’t exactly follow that prescription in my own home (we feed our leftovers to our chickens rather than our ants), I think often of my grandma’s tenderness toward these small creatures. She passed away almost thirty years ago, presumably unaware of insect decline or insect-conservation strategies, yet still, she understood these basic facts: insects (like us) deserve attention, and insects (like us) need to eat.

Bees can be picky eaters, too

Here at Xerces, helping people address the dietary needs of invertebrates is, in fact, a very large part of what we do, particularly when it comes to our work with bees, butterflies, and other insect herbivores. We design habitat projects that support the foraging needs of at-risk species, and that have enough diversity to be climate resilient and resistant to competition with weeds. We work with farmers, foresters, and fellow community members to create green spaces that aren’t just green, but are the right kinds of green: flourishing with native plant communities that our insects, songbirds, and other wildlife have coevolved to coexist with.

We gather information on the feeding preferences of endangered bees and use this to inform our work. We remind our audiences that while some bees are generalists and you may see them flitting about any number of ornamental flowers, many others are specialists, and able to collect pollen from only a limited number of native plant taxa alongside which they have evolved. Although the number of bees exhibiting this “picky eater” syndrome varies regionally, often the number can be quite high. In the central United States, roughly 30 percent of the approximately eighteen hundred bee species that can be found in the region are specialists on particular pollens.

For example, females of the pale fairy bee (Perdita pallida), one of the smallest bees here in Minnesota, collect pollen to feed their offspring from nothing but Dalea, a genus of native plants in the legume family generally known as prairie clover. At least two of our plasterer bees (Colletes) collect pollen specifically from Physalis ground cherries, unassuming little plants that also support specialist leaf-miner moths, who in turn feed specialist parasitoid wasps.

Even insects without highly specific dietary requirements often have preferences. Thanks to a robust database managed by our bumble bee team, we know that the rusty patched bumble bee (Bombus affinis), a species federally listed as endangered, has been documented on at least 138 different plant genera over the years, but roughly a fifth of the known occurrences, including the only one I’ve ever seen, have been on bee balm (Monarda).

Moving beyond bees, these types of dietary specializations are the norm rather than the exception. The vast majority (roughly 90 percent) of plant-feeding insects are specialists, adapted to digest only a limited suite of plant chemistries, often corresponding to a particular plant family or genus. Milkweed longhorn beetles (Tetropes spp.), beautiful insects that I appreciate for their uncanny tendency to look right at my camera rather than hide or fly off or play dead, have a larval stage that feeds strictly on the roots of milkweed (Asclepias spp.). Forked fungus beetles (Bolitotherus cornutus) spend their entire life on Ganoderma mushrooms, the familiar rounded shelf or bracket fungi seen growing on trees. The beetles use these fungi for virtually everything: egg-laying substrate, larval and adult food, pupation sites, overwintering protection, location of prospective mates, and (my favorite) a nice flat stage for their courtship behaviors and displays. The Oregon plant bug (Lygus oregonae), a rare and declining species in the West, is known to feed on just two unrelated plants, silver beachweed (Ambrosia chamissonis) and coastal sand verbena (Abronia latifolia), both of which are limited to coastal sand dune habitat. Xerces’ surveys for this bug in 2009 documented the species at just one of forty-nine beaches visited, even though thirteen of the sites had appropriate food plants present.

Which reminds us: the occurrence of suitable and abundant food is, unfortunately, usually not enough to support the long-term persistence of a sensitive species. In addition to the loss of food plants, many insects are threatened by regular encounters with pesticides in the places where they eat, drink, swim, fly, and nest. In our increasingly developed and ecologically degraded landscapes, many insects struggle to meet their basic needs for shelter—including sites for nesting, overwintering, oviposition, and protection from weather and pesticides. And many insects, particularly those with limited dispersal abilities, require some degree of habitat connectivity in order to find appropriate mates, to maintain genetic resilience, to respond to climate change, and ultimately to sustain or expand their populations.

My introduction to the Xerces Society many years ago was through this very magazine, Wings. What drew me in were the fantastic photographs and stories about obscure insects with behaviors that are sometimes so bizarre (like tortoise beetle larvae carrying their own excrement above their head all day to deter predators!), and sometimes so familiar (like leafcutter bees creating bedrooms for their offspring, and with lovely wallpaper, even!). All of these years later, I still find it wonderful that there are so many ways we humans can relate to insects. Think of the care a bumble bee queen takes in selecting her new nest site, sometimes checking out dozens of potential options before settling on the perfect place to call home. Think of the ingenuity of leafcutter ants who not only cultivate their own fungus for their colony to feed on, but also utilize antimicrobial bacteria for pest control and nitrogen-fixing bacteria for fertilizer in their mushroom-farming endeavors. Think of the creativity of a male dance fly bringing silk balloons (sometimes with a little edible treat inside) to his prospective lover.

Like us, insects are parents, siblings, homemakers, farmers, community members, and innovators. Like us, they can be resourceful, insightful, decisive, and prone to copy their peers. To take this notion still further, recent research on fruit flies and other groups suggests the unsurprising but long-denied potential for insects to have feelings, including fear, anxiety, excitement, and motivation. Does a caddisfly, for instance, feel frustration when exposure to pesticides in a stream causes her to have difficulty building and repairing her ornate underwater home? Or perhaps a better question is, “How could she not?”

As we continue to energize more people to act on behalf of insects, these similarities matter. The stories and struggles of insects can help us to recognize their inherent value, regardless of their relationship to us—sometimes useful, sometimes inconvenient. When we understand more about the day-to-day lives of insects, we see them with greater interest, admiration, and concern, and ultimately we are more inspired to help out—even if that simply means feeding our resident ants. 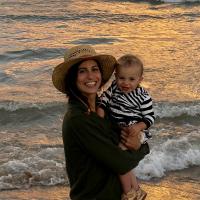 Based out of central Minnesota, Sarah leads Xerces’ upper Midwest native bee and monarch habitat restoration projects, working closely with farmers, agencies, and conservation groups to promote pollinators on farms and in natural areas. Sarah provides habitat restoration support to hundreds of farmers and farm agency professionals across the upper Midwest, with an emphasis on the testing of new, cutting-edge restoration methods on a wide range of fruit, vegetable, and grain farms.