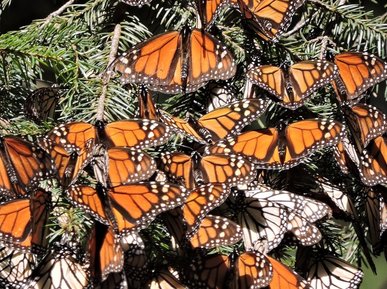 The 2016-2017 population estimate for monarch butterflies overwintering in Mexico was announced on February 9. Because the butterflies are clustered so closely at their overwintering sites, individual monarchs cannot be counted.  Instead, the area of forest that is densely coated with butterflies is measured. This winter, the area occupied by the butterfly colonies covers 7.19 acres (2.91 hectares) and contains an estimated 146 million butterflies. This represents a 27% decrease compared to last year’s survey, which is conducted every winter in the Monarch Butterfly Biosphere Reserve by scientists from World Wildlife Fund (WWF) Mexico.

Some good news is this winter’s population estimate is actually higher than had been expected by many.  The 2016 season began with catastrophic ice/snow storm that struck the overwintering colonies in March (after the 2015-2016 winter population measurements had been made) just as the migration north was beginning.  Low numbers of adult butterflies were subsequently reported in the U.S. during the spring of 2016.

A graph of historic population records (measured in acres) is available at the Journey North website.  Overwintering monarchs reached a peak population covering 44.93 acres in the winter of 1996-1997 and show a long-term average of about 15 acres. Though this winter’s estimate is the second largest population measurement reported in the past six seasons, it is still 47% below the long-term average.

Researchers, non-governmental organizations, academic institutions, and agencies have been collaborating under the Monarch Conservation Science Partnership to identify targets for monarch conservation.  By 2020, the primary objective is to increase monarch population numbers to 6 hectares (about 15 acres) of area occupied in Mexico, or approximately 225 million individual butterflies.  To reach this goal, habitat restoration is essential.  The 2016 Monarch Conservation Implementation Plan calls for the addition of at least 1 to 1.5 billion milkweed stems (needed for monarch reproduction) and the abundant nectar resources to support monarch migration.

While monarch and other pollinator populations have been plummeting, public awareness and interest participating in their recovery has been surging. The groundswell of efforts to plant more milkweed and other pollinator-friendly plants across the United States is extremely encouraging.  Bee City USA and Bee Campus USA affiliates, along with concerned organizations and individuals, many in cooperation with government agencies, are increasing their efforts to spread awareness of the monarchs’ plight. Monarch Watch even offers free milkweed plants appropriate to the locale to nonprofit organizations that commit to large scale habitat restoration. More and more nurseries are making milkweed and other native plants available to home gardeners wanting to do their part to help. Let’s not be the last generation to see the great monarch migration!

In addition to becoming a certified Bee City USA or Bee Campus USA affiliate, here are ways you can help:
1) Create a pollinator garden and inform others by registering, certifying and/or posting a pollinator habitat sign.

2) Participate in citizen science projects to help study monarchs and other pollinators.

3) Spread the word about protecting pollinators!