Partnering With Communities To Protect Pollinators

A version of this article originally appeared in the Spring 2022 edition of Wings magazine.

These days it seems that everyone is talking about bees, but it hasn’t always been like this. When I joined the Xerces staff in 1999, pollinator conservation was not something that attracted widespread interest. At that time, bees were not in the news, and indeed were barely on the radar of most conservationists.

Although relatively few people were interested two decades ago, the news of pollinator declines has resonated over the intervening years, leading to a huge growth in awareness of and enthusiasm for protecting bees and other pollinators. Bees can be found anywhere—in parks, community gardens, backyards, abandoned lots, creek corridors—and effective conservation actions can be carried out in any green space. In recent years, Xerces staff have expanded our involvement in towns and cities, particularly through efforts to reduce pesticide use, collaborations with local groups and park managers on habitat projects, the Bring Back the Pollinators campaign, and Bee City USA and Bee Campus USA, the last two of which have become major conduits for our work with local communities.

The Bee City USA initiative was founded by Phyllis Stiles in 2012; the first affiliate was her home town of Asheville, North Carolina. Affiliates make a commitment to create habitat, reduce pesticide use, and do outreach. When Ashland, a city in southwest Oregon, became an affiliate in 2015, staff at Southern Oregon University saw what was happening and asked whether the college could join. With their assistance, Phyllis developed the framework for Bee Campus USA. Campus affiliates have the same requirements as those for cities, but with the addition of community-service projects and the incorporation of pollinators into the curriculum. In 2018, Bee City USA and Bee Campus USA became part of the Xerces Society.

There are now more than three hundred city and campus affiliates, forming a network that reaches forty-five states and the District of Columbia. The combined efforts of these communities result in real change for pollinators. In a typical year, thousands of acres of new habitat are created, varying from school gardens and pocket parks to extensive meadows. Affiliates also work to reduce pesticide use by adopting an integrated pest management plan, sometimes with citywide bans on particular insecticides. In addition, hundreds of thousands of people are reached through volunteer activities, talks, tabling at public events, and social-media campaigns.

Xerces provides information and guidance, but it is the creativity and energy of the affiliates that drives the program’s success. In Decatur, Georgia, the Bee City committee launched a broad-based initiative to help educate city residents about the dangers posed to bees and other pollinators by insecticides used in mosquito management. In Davidson, North Carolina, Nature WOW-NOW kits, which include fun outdoor craft materials and science activities about pollinators, were created and distributed. Several affiliates have developed their own local pollinator-garden certification programs to educate people about the components of pollinator habitat, and to inspire them to create or enhance their gardens.

The list of examples could go on, but one that illustrates the impact of dedicated Bee City volunteers is the partnership between two affiliates in Wisconsin—the city of Appleton and Lawrence University. Inspired by No Mow May, a movement that began in Britain, residents of Appleton decided to encourage gardeners to let their lawns grow during the month of May, allowing dandelions and other “weeds” to bloom and thus to provide foraging resources for early-season pollinators. The city’s weed-control ordinances meant that this would be no simple task, and in 2019 the first attempt to change the rules failed. Determined residents tried again in 2020, and this time persuaded the City Council to agree to suspend its weed ordinance. In response, well over four hundred property owners participated in No Mow May. This success led not just to Appleton again hosting No Mow May in 2021 and 2022, but to the campaign spreading to cities across the country.

Protecting Bees in Every Landscape

Efforts like this are inspiring, and they bring tangible benefits to bees. Even so, letting lawns grow is just a starting point for changing neighborhoods into places that will support bees and other wildlife. To truly have a lasting impact, we need to reduce the area devoted to grass and replace lawns with native plantings, provide for the whole life cycle of bees, and reduce or eliminate the use of pesticides.

To this end, Xerces collaborates with community groups to find solutions for all sorts of landscapes. We have worked with community gardens to install pollinator plantings, and have supported urban farms in the planting of hedgerows and insectary strips that bring habitat into densely developed landscapes. We have also collaborated with city park managers and golf course superintendents to design and install habitats as varied as meadows and riparian buffers. We help gardeners by offering information through talks, workshops, webinars, and outreach campaigns such as Bee-Safe Nursery Plants and Bring Back the Pollinators.

My role within Xerces has taken a few twists and turns, and I now find myself turning again, this time toward community engagement and conservation in towns and cities. Personally, I’m excited about this new direction. I’ve had the good fortune to work in some beautiful places, but some of the most satisfying and enjoyable times of my career have occurred in the seemingly mundane surroundings of parks, community gardens, school grounds, disused railways, and similar locations—places that provide important space for wildlife in disturbed landscapes, and that, for me, offer the joy of engaging with people to protect the places they value and the tiny creatures that live in them. 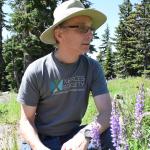 Director of Outreach and Education
Matthew has spent more than 35 years working with people from all walks of life to create better places for wildlife. His career began in England and took him to Kenya before his arrival in the United States. He has worked for the Xerces Society for two decades, initially at the vanguard of the movement to protect pollinators, but he shifted to communications, and now community engagement and conservation in towns and cities. Matthew is author of numerous articles and other publications, including Attracting Native Pollinators (Storey Publishing, 2011) and Gardening for Butterflies (Timber Press, 2016).

Your Support Makes A Difference!

Xerces’ conservation work is powered by our donors. Your tax-deductible donation will help us to protect the life that sustains us.