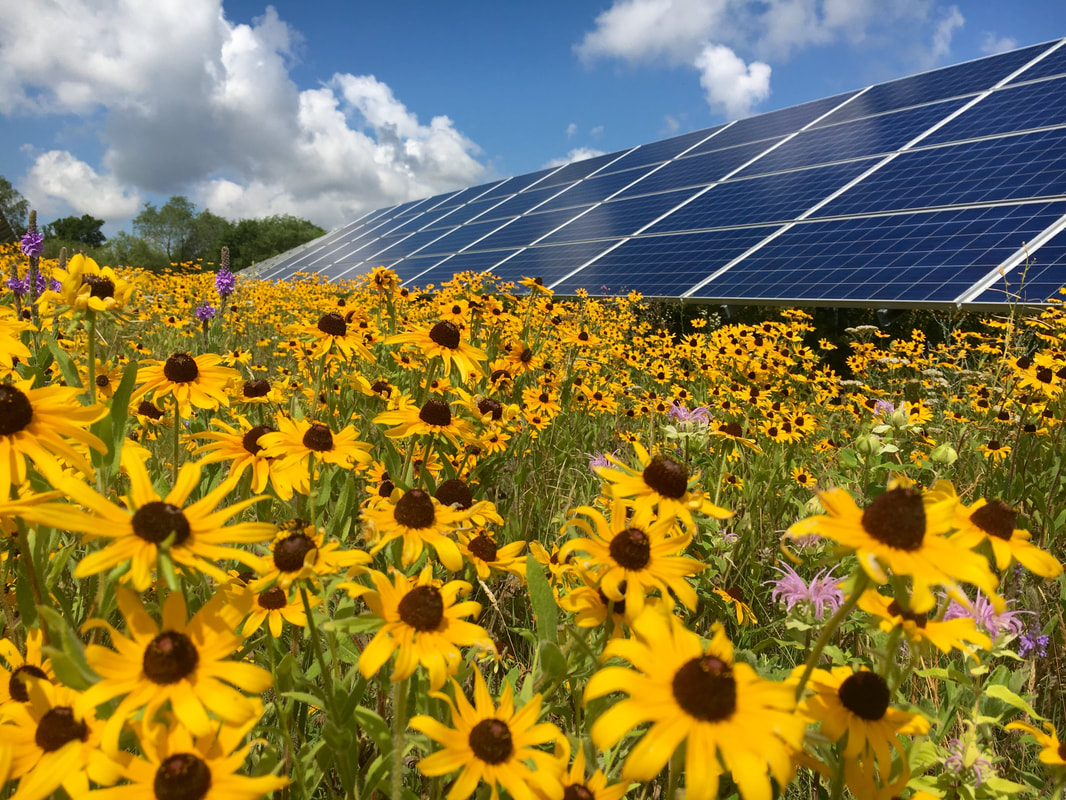 Over the past few years, there has been an increasing interest in pollinator-friendly habitat on solar sites. Drawn by the opportunity to diversify farm income with a 20-30-year land lease, farmers are increasingly considering whether solar is right for a portion of their property. These sites, ranging in size from 5 to over 100 acres, are a new land use that draws the interest of neighbors and local leaders. Drastically different from early-stage solar development in the desert southwest, a growing body of research indicates the land under and around solar arrays may be managed to support wildlife, including pollinators and other beneficial insects that can contribute to increased crop yields.

Historically, grass has been kept under control by labor intensive mechanical mowing and weeds have been spot sprayed if necessary. In some regions, sheep grazing within the facility may be utilized to control vegetation. Sites are maintained approximately 5-9 times per year during the growing season, depending on location. While providing a renewable source of energy is admirable, many solar companies are seeking ways to contribute even more to sustaining the environment and benefiting local agriculture.

Implementing pollinator programs necessitates identifying native seed mixes to support pollinator habitats that are ecologically appropriate and well adapted to the region and site.  Rather than broadly spraying herbicides and mowing to ensure weed control, proper monitoring and evaluation are recommended to reduce maintenance operations. For example, pollinator habitat on solar sites may be maintained by mowing in the winter to encourage natives to outcompete non-native species, planting low-growing forage for pollinators under and between solar arrays, and actively managing and spot treating noxious and invasive plant species.

A 2016 study in the United Kingdom conducted by experienced ecologists reported that when solar sites are managed as foraging habitat for pollinators, “[They] are likely to provide further benefits to humanity including carbon storage, water cycling, erosion control and provision of pest controlling species such as solitary wasps and farmland birds…There are very few other ways that farmers can earn a sustainable amount of money by creating large areas of conservation habitat.” The Department of Energy hosted a webinar in early 2017 in which Rob Davis of Fresh Energy listed the potential benefits of pollinator-friendly habitat creation on solar farms: increases in gross revenues, improvements in crops yields on surrounding farmlands, decreased operations and maintenance costs due to a reduction in mowing, enhanced storm water performance, and zoning advantages.

The colonists brought honey bees with them from Europe in the 1600s, introducing the first honey bees to North America. However, North America has about 4000 species of indigenous bee species that are equally beneficial pollinators, and even better in many cases, than honey bees.  Unlike honey bees, native bees do not produce honey, and most of them live out their lives in relatively small areas so we can’t transport them in boxes by the thousands to crops as they bloom around the country.

Pollinators provide an ecological service required by 90% of the world’s wild plant species and 75% of crops. Annually, native bees contribute more than $3 billion to the U.S. agricultural economy. Commercially managed honey bees contribute more than $15 billion each year due to pollination for over 100 crops. A 2016 report from the United Nations elaborates why we are so concerned about pollinators these days: “More than 40 percent of invertebrate pollinator species, particularly bees and butterflies, face extinction” which places the United States, as well as other nations, in direct threatening food crises. Solar sites can significantly contribute to the health of both honey bees and native pollinators.

From an industry-wide perspective, Cypress Creek Renewables, CCR, is investigating the feasibility of a scalable implementation plan to make almost all solar sites pollinator-friendly. CCR is also collaborating with local beekeepers to investigate the possibility of placing bee hives adjacent to new and existing solar arrays. Doing so acknowledges the importance of benefitting local agriculture and engaging private-sector investment in addressing the pollinator crisis. As recently observed in a National Geographic feature story, Solar Honey is the epitome of collaboration and local-based efforts to further infiltrate the notion of productive and environmentally-conscious land use when a farmer chooses to lease agricultural land for a solar array.